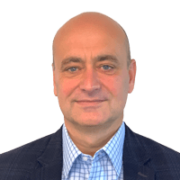 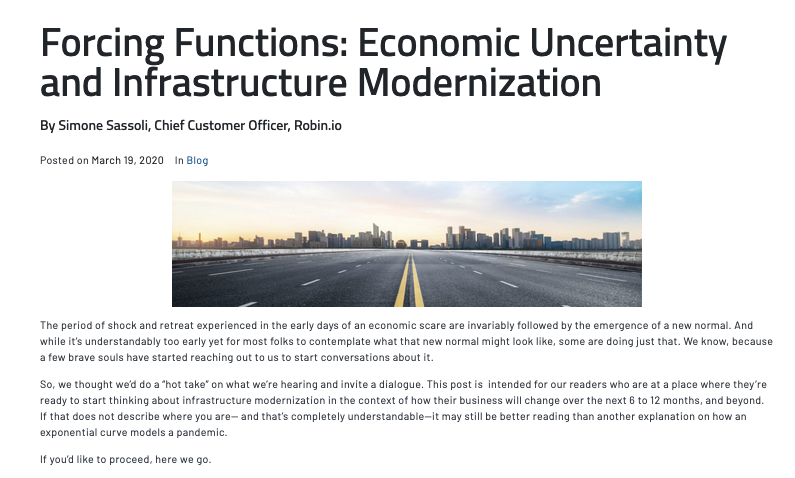 The period of shock and retreat experienced in the early days of an economic scare are invariably followed by the emergence of a new normal. And while it’s understandably too early yet for most folks to contemplate what that new normal might look like, some are doing just that. We know, because a few brave souls have started reaching out to us to start conversations about it.

So, we thought we’d do a “hot take” on what we’re hearing and invite a dialogue. This post is intended for our readers who are at a place where they’re ready to start thinking about infrastructure modernization in the context of how their business will change over the next 6 to 12 months, and beyond. If that does not describe where you are— and that’s completely understandable—it may still be better reading than another explanation on how an exponential curve models a pandemic.

The current period of shock we’re experiencing is unique in more ways than we’d like to count. But, the relatively quick adaptation to working from home and remote learning offers a clue into what that new normal might look like. Dramatic discounts applied to the multiples on stocks of travel-related companies suggest that investors are bracing for a shift in buyer behavior that outlasts the current scare.

Perhaps what’s likely to emerge from all this is a rethought approach to long-held values placed in economic activities like business travel and campus-style higher education. Organizations responsible for delivering the services that enable these reordered economic values will need to rely on cloud infrastructure to make it happen. Thus, a shift that’s been happening incrementally since 2008 might well experience a step-function shift. The conversations we’ve started having (admittedly a non-statistical sample) can be loosely organized into three infrastructure modernization themes that cloud architects and infrastructure operators are thinking about.

Let’s look at each in turn.

In the near term, hardware capacity is likely to be more or less fixed. Planned refresh cycles might be stretched, and procuring net-new capacity is unlikely to be a priority for C-level leadership looking to preserve cash and eliminate risks that are easy to avoid.

But, for infrastructure operators scrambling to maintain SRE programs and keep services running under increased load, squeezing more, useful work out of semi-fixed hardware capacity has ceased to be a pilot exercise focused on customer delight. It’s become existential. If they’re to maintain their orgnizations’ ability to serve customers without “paper-over-the-problem” tactics like over provisioning (something we needed to fix anyway), there’s a sudden and imperative focus on operating at acceptable levels of performance in resource-constrained environments. How to get there will almost certainly require new ways of thinking about the role automation plays.

There’s another interesting meta-theme in this, related to 5G. The proliferation of devices and data in 5G make automation a “must have.” Humans simply don’t have the capacity to provision, deploy and manage apps and service chains in 5G. Amplify this by the new realities of resource constraint, and the challenge becomes very real and rather urgent for wireless network operators deploying 5G networks.

The “doing-more-with-less” theme extends beyond the data center and hardware capacity. People seem more interested in software management automation. This seems to be less about the ability to deploy quickly than it is about the ability to augment the role operations teams play in keeping infrastructure running.

Automation in this context also extends to domain experts building applications. If they can build and deploy with the help of automation, that means less human engagement from various infrastructure teams, which means those folks can do other useful things for the organization long term. The ability of a thoughtful automation game plan to help humans do the job of deploying and managing applications in different infrastructure environments is a theme we’re hearing, and it’s an important nuance from how we were hearing automation talked about two months ago.

Those app dev teams don’t want to touch infrastructure. They’d prefer to not even have to know it’s there. Automation can mask the complexity of infrastructure and empower app developers to create, deploy and manage apps without the headache of dealing with infrastructure. In a world where there are fewer infrastructure professionals to support a growing number of app devs, automation that supports app devs in deploying and running their apps properly becomes something that looks very much like a requirement, not a nice-to-have.

A Discontinuous Shift Upward in Agility

The third theme we’re hearing is an interest in agility overall. In our pre-crisis context, we were used to thinking about agility as a synonym for deploying software to production more quickly and more often. That’s certainly a part of what folks are talking to us about now, but there’s another element that broadens the conversation: agility that not only supports deployment of new services for the sake of convenience and customer delight, but agility that supports quick pivots to new economic and market realities.

Examples here might include integrating new messaging or collaboration services that support new, remote-first working or learning models. It’s admittedly a broad theme, but it’s interesting to think about the possibilities.

Of course, each of these three themes are conversation lines that were open before all this happened. And, yes, we’re in the business of helping companies figure out answers to each of these challenges, so of course we’re going to attract people interested in having these conversations. What’s different here is the sense of urgency, focus and intensity that we’re hearing.

We’re at the beginning of a new disruption, and the first priority is to take care of our families and communities. Once things are stabilized a bit and you’re interested in joining an emerging dialogue about how infrastructure modernization and automation can play a role in building the foundation of services that support new models of economic value post-crisis, let us know. We’ll be here on the couch with our pets, in the living room, laptops open, ready to chat.