Controlling IOPS in a shared Environment 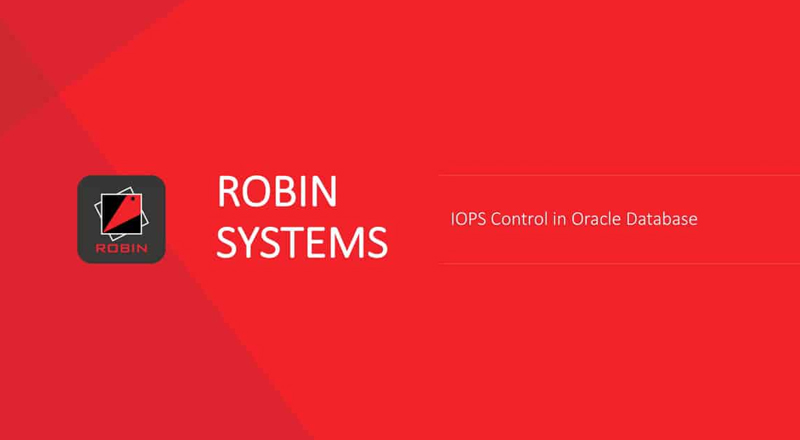 In this video, we demonstrate how easily we can throttle IOPS from an application to address the noisy neighbor problem with Robin Hyper-Converged Kubernetes Platform

Controlling IOPS in a shared Environment

Controlling IOPS in a Shared Environment

To meaningfully describe the performance characteristics of any storage device, it is necessary to specify a minimum of three metrics simultaneously: IOPS, response time, and (application) workload. Absent simultaneous specifications of response-time and workload, IOPS are essentially meaningless. In isolation, IOPS can be considered analogous to “revolutions per minute” of an automobile engine i.e. an engine capable of spinning at 10,000 RPMs with its transmission in neutral does not convey anything of value, however an engine capable of developing specified torque and horsepower at a given number of RPMs fully describes the capabilities of the engine.

In 1999, recognizing the confusion created by industry abuse of IOPS numbers following Intel‘s release of IOmeter, a performance benchmarking tool, the Storage Performance Council developed an industry-standard, peer-reviewed and audited benchmark that has been widely recognized as the only meaningful measurement of storage device IO performance; the SPC-1 benchmark suite[citation needed]. The SPC-1 requires storage vendors to fully characterize their products against a standardized workload closely modeled on ‘real-world’ applications, reporting both IOPS and response-times and with explicit prohibitions and safeguards against ‘cheating’ and ‘benchmark specials’. As such, an SPC-1 benchmark result provides users with complete information about IOPS, response-times, sustainability of performance over time and data integrity checks. Moreover, SPC-1 audit rules require vendors to submit a complete bill-of-materials including pricing of all components used in the benchmark, to facilitate SPC-1 “Cost-per-IOPS” comparisons among vendor submissions.

Among the single-dimension IOPS tools created explicitly by and for benchmarketers, applications, such as Iometer (originally developed by Intel), as well as IOzone and FIO[3]have frequently been used to grossly exaggerate IOPS. Notable examples include Sun (now Oracle) promoting its F5100 Flash array purportedly capable of delivering “1 million IOPS in 1 RU” (Rack Unit). Subsequently, tested on the SPC-1, the same storage device was only capable of delivering 30% of the IOmeter value on the SPC-1.[4][5]

The specific number of IOPS possible in any system configuration will vary greatly, depending upon the variables the tester enters into the program, including the balance of read and write operations, the mix of sequential and random access patterns, the number of worker threads and queue depth, as well as the data block sizes.[1] There are other factors which can also affect the IOPS results including the system setup, storage drivers, OS background operations etc. Also, when testing SSDs in particular, there are preconditioning considerations that must be taken into account.[6]

The most common performance characteristics are as follows:

(with the answer typically converted to MegabytesPerSec)

Some HDDs will improve in performance as the number of outstanding IOs (i.e. queue depth) increases. This is usually the result of more advanced controller logic on the drive performing command queuing and reordering commonly called either Tagged Command Queuing (TCQ) or Native Command Queuing (NCQ). Most commodity SATA drives either cannot do this, or their implementation is so poor that no performance benefit can be seen.[citation needed] Enterprise class SATA drives, such as the Western Digital Raptor and Seagate Barracuda NL will improve by nearly 100% with deep queues.[7] High-end SCSI drives more commonly found in servers, generally show much greater improvement, with the Seagate Savvio exceeding 400 IOPS—more than doubling its performance.[citation needed]

While traditional HDDs have about the same IOPS for read and write operations, most NAND flash-based SSDs are much slower writing than reading due to the inability to rewrite directly into a previously written location forcing a procedure called garbage collection.[8][9][10] This has caused hardware test sites to start to provide independently measured results when testing IOPS performance.

Newer flash SSDs, such as the Intel X25-E, have much higher IOPS than traditional HDD. In a test done by Xssist, using IOmeter, 4 KB random transfers, 70/30 read/write ratio, queue depth 4, the IOPS delivered by the Intel X25-E 64GB G1 started around 10000 IOPs, and dropped sharply after 8 minutes to 4000 IOPS, and continued to decrease gradually for the next 42 minutes. IOPS vary between 3000 and 4000 from around the 50th minutes onwards for the rest of the 8+ hours test run.[11] Even with the drop in random IOPS after the 50th minute, the X25-E still has much higher IOPS compared to traditional hard disk drives. Some SSDs, including the OCZ RevoDrive 3 x2 PCIe using the SandForce controller, have shown much higher sustained write performance that more closely matches the read speed.[12]